Throughout the event, far-right extremists of a variety of stripes announced their presence: White nationalists from Nicholas Fuentes’ “Groyper Army” rushed to lead the march from the White House to the Congress and Supreme Court buildings, their blue “America First” banners held high. Oath Keepers and other militiamen, wearing body armor and prepared for battle—though unarmed, since Washington forbids open carry of guns within its city limits—joined eagerly in the March. 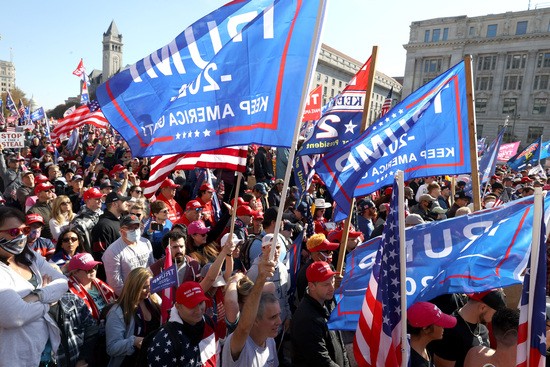 The crowd was estimated to number in the low tens of thousands.At one point, Fuentes addressed the crowd with a bullhorn. “We’re up against the media, and against the giant corporations, and against the swamp, and the government, and the CIA, and the FBI, and the intelligence community, and it is a pretty big path ahead of us,” he said. “There are a lot of them, and they wield much power. But I think to myself this: I have much confidence in known that God is on our side!” The crowd roared.Alex Jones’ and his Infowars operation were also easy to find, particularly Jones himself, who joined the Proud Boys in their morning march, and then was surrounded by them for “security” as they marched. “This is what America looks like!” they chanted as they went.- Advertisement – QAnon conspiracy cultists were also present in abundant numbers. At one point, the crowd collectively chanted the QAnon slogan: “Where we go one, we go all!”Violence at the event was relatively limited during the day, due to a light turnout of counterprotesters, most of whom gathered near the Supreme Court building. Some fighting broke out between them and rallygoers, mostly involving pushing and shoving. Metro police moved to create a barrier between the two factions, with the antifascists mostly relegated to a small patch of ground at the rally destination.Several pro-Trump speakers at the event bore mainstream Republican credentials, but their rhetoric was straight out of the far-right insurrectionary handbook. Republican Congressman Louie Gohmert of Texas, for instance, told the crowd that their fight against the election outcome was not merely about Trump, “this is about the future of America,” he said. “This is a multidimensional war.”- Advertisement – – Advertisement – 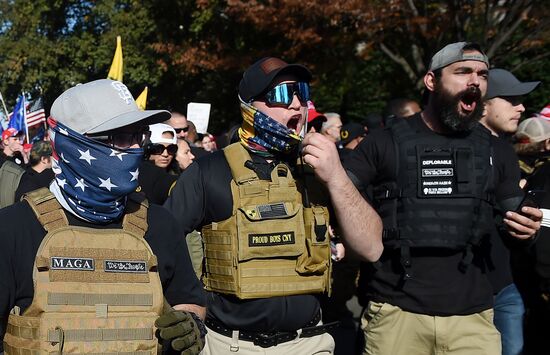 Militiamen wearing body armor were a common sight at the Saturday rally.From the outset, the aggregation of white nationalists, street brawlers, “Patriot” militiamen, and conspiracy theorists who had organized and promoted the event on social media made their presence felt. Even before the mid-morning event was scheduled to start, a block-long phalanx of several hundred thuggish Proud Boys marched through downtown Washington, chanting “Fuck antifa” and “USA! USA!” as they made their way to Liberty Plaza near the White House, the event’s main gathering point.Trump had promoted the event in a tweet Friday, saying he found the rally “heartwarming,” and that he “may even try to stop by and say hello.” And indeed he did, cruising past the marchers in his limousine and waving to them from inside a rear passenger window, en route to a day on the golf course.- Advertisement – Gohmert called for an Egypt-style revolution to take to the streets and rise up against the election result. He also suggested that elections in California and New York were fraudulent, so their entire results should simply be tossed out (which would indeed reverse the election’s outcome). “This was a cheated election,” he claimed.Former presidential adviser Sebastian Gorka also addressed the crowd, urging them to refuse to accept a Biden victory. “Here’s the path to victory,” he said. “This is a Republic, we don’t let 51% dictate to 49%,” adding: “The only fascists are Antifa, and BLM are racists.”“We have to put the pressure on,” Gorka continued. “You get on the streets. You get your MAGA hat on and you send a message to the state senatte. If you certify a fraudulent election, you will never, ever get re-elected.”“We don’t want violence, but we will never let them steal our republic,” he concluded. “Get your MAGA on!”